Tails' Skypatrol is a 1995 video game for the Sega Game Gear, officially released on April 28th, 1995. It is a prequel to the other Sonic games, following the adventures of Miles "Tails" Prower.

Miles "Tails" Prower decides to indulge his adventure in a separate way from his Sonic friend. The fox flies without a target until it reaches a solitary island with a large steel railroad. Concerned that Dr. Eggman could build another base, he goes to the place to check. When it arrives, he senses vibrations from the railroad, so he jumps into the bushes to hide. As a result of the confusion, there appears a strange eccentric lady who looks like the great Witchcart, announces that she is the owner of the island and that dissidents will be transformed into crystals. Tails is determined to rescue the island's animals, so he opposes Witchcart and his henchmen: Focke-Wulf, Bearenger and Carrotia. 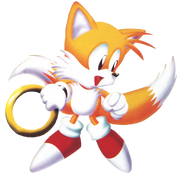 Retrieved from "https://sega.fandom.com/wiki/Tails%27_Skypatrol?oldid=28305"
Community content is available under CC-BY-SA unless otherwise noted.