Sonic and the Black Knight

Sonic and the Secret Rings

Sonic and the Black Knight is the sequel to Sonic and the Secret Rings for Wii, which came out in Spring 2009. It was first seen on the cover of Nintendo Power, and was officially announced by Sega in a press release on July 21, 2008. The game takes place in an Arthurian setting, where Sonic uses a sword to battle his foes. It is be the second Sonic game in the Sonic "storybook" series for the Wii.

In a time of darkness across a grassland plain, the young daughter of Merlin; Merlina, is running away from the dark King Arthur. King Arthur draws his sword, Excalibur and summons creatures of darkness, trapping Merlina. In an attempt to defend herself, hitting the ground with her staff, she calls upon a knight that is swift as the wind. A beam of light shoots up into the sky parting the dark clouds, where Sonic falls before Merlina with two chilidogs. Seeing the new world that he is in, while eating one of the two chilidogs, he crosses eyes with King Arthur. Realizing why he was called, he immediately takes out all the dark creatures behind him before returning to stare at King Arthur again. Before Sonic can begin his attack on King Arthur, Merlina holds him back and teleports Sonic and herself to a safe area.

Sonic has the ability to help people, which will bring him closer to Knighthood, or smite them, which will take a hit to his reputation. At the end of a stage, it calculates his good deeds and his mistakes, giving his a score based on how many of each he did. He can buy items from villagers, which gives him bonuses and which the player can trade online with friends. One of the main differences from Sonic and the Secret Rings, apart from Sonic's sword, is that Sonic is controlled with the analogue stick on the Nunchuk, instead of using the tilt feature of the Wii Remote. A small swing with the Wii Remote makes Sonic do a basic slash, while more advanced combinations can produce parries and thrusts. The skills system from Sonic and the Secret Rings is back, but the developers are making sure it doesn't slow down the game's tempo. There are playable characters in this version, but they are completely optional. Two confirmed characters are Knuckles, who can wield two swords at once, and Shadow. Later they announced that Blaze and Silver will also be playable. Also, there will be 2D and 3D levels like in Sonic Unleashed. 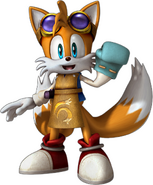 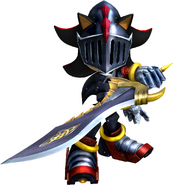 The soundtrack was done by Jun Senoue and the music will mostly be familiar Sonic tunes with a "Celtic vibe".

Sonic and the Black Knight/Unused Voices

Retrieved from "https://sega.fandom.com/wiki/Sonic_and_the_Black_Knight?oldid=23819"
Community content is available under CC-BY-SA unless otherwise noted.