Sonic Unleashed (Sonic World Adventure) is a video game that is in the Sonic the Hedgehog series. The game helped bring Sega's reputation back up, and the game helped Sega gain the trust of the advantage consumer aging.

Dr. Eggman is the primary antagonist for Sonic Unleashed. At the beginning of Unleashed, Dr. Eggman manages to trap Super Sonic. Sonic transformed using the power of the Chaos Emeralds - using a powerful new ray weapon, and uses the Emeralds' energy to unleash a powerful beast from the center of the planet. This has devastating consequences for the planet, which subsequently shatters into pieces; it is up to Sonic to return the seven broken continents back to normal by retrieving the Chaos Emeralds and activating their power. In addition, Eggman's ray also causes an unexpected transformation to Sonic's state, known as the Werehog, changing the way the story unfolds.

Sonic can go form 2D to 3D in the stages. Sonic also has new abilities such as the Drift that allows Sonic to slide around a corner at high speeds. Players are also able to perform a new ability which is called the Quick Step. The Quick Step allows you to press a button, the quick step helps you make easier quick movements. You can olso now experience buy upgrades/food/items in a shop. Those items help you in the levels. Sonic now has the Boost ability, which was the first time that it was in a 3D Sonic game. There is also a day and night system in the game. In the daytime you play as sonic and in the nighttime you play as the Warehog. When you play as Sonic the Hedgehog during the day, you will be doing high speed platforming. When playing as the Warehog you are going slower, doing platforming/beat-em-up levels. The game will also feature Hub Worlds. Their are different missions you can do in the hub worlds.

The Wii version of the game will be developed specifically to take advantage of its controller's capabilities, with notable differences in gameplay. The game will use the Wii Remote and/or Nunchuk option; whilst character movement and basic actions will be assigned to buttons, certain actions will benefit from physical movements. It will support the GameCube controller, and also the option of using the Classic Controller. The levels, whilst sharing the same styles, themes and motifs as the Xbox 360 and PlayStation 3 versions, will be different to those shared between the Wii. First the gameplay will be changed, tuned, and balanced specifically for the Wii," says Patrick Riley, the game's producer at Sega of America. "Secondly, the levels will be different, designed specifically for the Wii version. and the PlayStation 2 versions, and Dimps will be involved with design of the daytime stages for these versions. 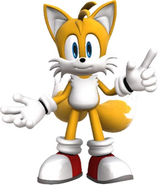 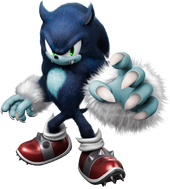 Chip Light Gaia
Add a photo to this gallery

The Sonic Unleashed Movie HD
Add a photo to this gallery

Retrieved from "https://sega.fandom.com/wiki/Sonic_Unleashed?oldid=25307"
Community content is available under CC-BY-SA unless otherwise noted.