Sonic Rivals is a game in the Sonic series. The game was developed by Backbone Entertainment exclusively for the PlayStation Portable. The game was supervised by Sonic Team USA.

Sonic Rivals one of the few sonic games that is in 2.5. Sonic Rivals has many different modes to choose form. These are Single Player, Story Mode, Challenge Mode, and Cup Circuit. There is also the Play Mode which features multiplaye races where players can bet cards or just race for fun. There is a Challenge Mode in which the player is given a goal to complete. After completing certain you gain a collectible cards. The game features 7 power-ups these are fire, ice, mine, illusion, wind, ring magnet and star. The star power-up is character specific. But all the other power-ups are available for all characters. 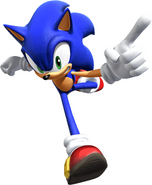 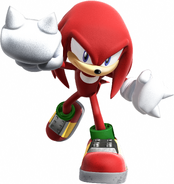 Metal Sonic
Add a photo to this gallery

Miles "Tails" Prower: Upon journeying to Onyx Island with Sonic, Tails is turned into a card by Dr. Eggman's camera as proof to Sonic that he indeed has the power to do so. It is now up to Sonic to save both him, and Amy, who has also been turned into a card. He appears as a playable character in the sequel, Sonic Rivals 2.

Amy Rose: The first to be turned into a card after Eggman, Sonic and Tails' journey to Onyx Island to discover this shocking truth. After Tails himself gets turned into a card, Sonic sets out to save them both.

Rouge the Bat: After discovering the truth about "Dr. Eggman", Rouge goes missing, but it is later revealed that she was turned into a card. Shadow sets out to save Rouge while trying to figure out what she had discovered. She appears as a playable character in the sequel, Sonic Rivals 2.

Espio The Chameleon : A card of Sliver only to help him.

Dr. Eggman: Eggman, in fact, is not the troublemaker in this story. He is actually the victim. He was the first to be turned into a card by his doppelganger Eggman Nega before the main storyline actually occurs.

Eggman Nega: As it turns out, Eggman Nega is the main antagonist of the game, who hails from the future. Masquerading as Dr. Eggman in the past, he uses a special camera to turn everyone into cards on Onyx Island, an island he brought along with him from the future. His master plan is to change his destiny by turning the whole planet into a card that he can control.

After collecting all of the character's cards will unlock outfits for that character. Each character has a total of three unlockable costumes:

The game contains six zones, each zone has three acts. The third is a boss battle.

Sonic Rivals features an extensive amount of collectible cards that spans a total of 150 cards. They feature cameo appearances of robots, major characters, minor characters, boxarts, and items from past Sonic games. The cards themselves are used to unlock secret costumes for the characters among other things.

IGN rated the game a 7.4 out of 10, highlighting its replay value, its graphics, as well as its entertaining stages. GameSpot, which rated the game a 6.9 out of 10, said there was a good sense of speed and colorful graphics. On average, this game has received a 66.2% through 28 reviews, according to Game Rankings' official score [1]. Game Informer gave it a 6.75 out of 10

Retrieved from "https://sega.fandom.com/wiki/Sonic_Rivals?oldid=24315"
Community content is available under CC-BY-SA unless otherwise noted.