Official concept artwork shows an early design of Silver The Hedgehog with a few differences. The main differences from the current final design include a long orange mane around his neck, bright blue eyes and different looking boots. More concept art of Silver was released in an interview with IGN, which was generally less similar to his current design. Notable designs include a hedgehog wearing a futuristic headset and another with markings on its quills. It is also revealed that Silver was originally named "Venice" after Venice, Italy, the place Soleanna is based on. He was also considered to be a mink, but the idea was later abandoned. Silver is said to have gone through over 50 different designs before reaching his final look.

In Sonic and the Black Knight, Silver appears as one of the Knights of the Round Table. He is called Sir Gallahad and is not in the main story line, but you can unlock him and Jet the Hawk (Sir Lamorak) to play as in the Multiplayer zone

He still has his psychic abilities shown that by pressing the A button on the wii remote he jumps with a cyan colored aura.

Also pressing the B button if your soul surge gauge has power in it he creates a field of psychic aura that leeches rings from opponents.

Silver's introductory appearance is in Sonic the Hedgehog for the Xbox 360 and PlayStation 3. His individual episode revolves around him travelling back in time to find the "Iblis Trigger" (Sonic the Hedgehog), who was the cause of his world being destroyed in the future. He is partnered with Blaze the Cat, a female cat who first debuted in Sonic Rush . Over the course of the game, Silver learns the truth about the "Iblis Trigger", and how his world can be saved from destruction.Silver's stages stray away from traditional Sonic elements as his stages center on the usage of his telekinetic abilities. Silver must use his psychic abilities to defeat enemies and solve puzzles. He is capable of altering surrounding environments at will, enabling access to various paths in the levels that other characters cannot, or require springs and other devices to reach. He is the slowest of the three main characters.

Silver is another one of Sonic's rivals, as he is a main character in Sonic Rivals for the PlayStation Portable. His story involves him responding to a distress signal, though he doesn't know who is sending it. Over the course of the game, he finds out that Eggman Nega is linked to this distress signal. Silver states that he will bring Eggman Nega back to the future where he belongs.Silver's abilities are similar to that of the other characters (Sonic, Shadow, Knuckles, and Metal Sonic) as the game is based on competition. He is able to confuse opponents by altering their controls. He is also given several alternate costumes. As the events of Sonic the Hedgehog never happened, Silver and Sonic are introduced to each other in the storyline for the first time ever.

Sonic and The Secret Rings Edit

While Silver is not part of the story in Sonic and The Secret Rings, he is playable in the game's Party Mode.

Silver, along with Sonic, Tails, Knuckles, Shadow, Espio, Rouge & Metal Sonic, appears in the sequel to Sonic Rivals: Sonic Rivals 2. He comes from the future once again to save both the past and his own time, somehow by collecting and hiding Chao from Eggman Nega. Espio, on orders from Vector, follows after Silver and eventually the two work together.

Silver is a playable character in the sequel to Sonic Riders. He is a Flight Type character and his default gear is Psychic Wave, which can turn into an Air Ride to access new areas.

Silver makes 2 cameo appearances in the third installment of Nintendo's smash hit, Super Smash Bros Brawl. His first cameo is as a collectable sticker and a trophy. His second cameo is in the Green Hill Zone stage where he, along with Tails and Knuckles, run across the background of the stage.

Mario & Sonic at the Olympic GamesEdit

Silver is a playable character in Mario and Sonic at the Olympic Winter Games, He is also in adventure mode with Blaze.

Silver is part of Team Vector along with Blaze in Team Sonic Racing.

Silver has been described as having "a strong sense of justice" and it is this personality trait that motivates him to head back into the past to correct the future. Silver is also very caring and believes in standing up for those who cannot stand up for themselves, which is why he accepted Blaze The Cat when everyone else was teasing her because of her pyrokinetic abilities. Although seemingly serious in nature, an interview states that Silver is somewhat immature. During cutscenes in Sonic the Hedgehog Blaze mentions that Silver is naïve several times, and also states that "He gets insecure when he's alone". Silver is also very kind and caring, as displayed toward Amy Rose, Princess Elise and the Chao he hid from Eggman Nega. Silver also seems to not like Sonic's personality and finds him foolish just like Shadow. In the Archie comics, Silver is far more friendlier to Sonic and shows high respect for him.

Silver's primary ability is Psychokinesis. He is shown to use the powers in a wide variety of ways. Offensive uses for his psychokinesis include being able to lift and throw anything in his path including objects, enemies, projectiles, and even other characters. He can also fire shock waves that can paralyze and kill enemies. Defensive abilities include freezing incoming objects and altering the control scheme of opposing players, and making them forget how to fight temporarily. Other uses for Silver's psychokinesis are hovering, levitating, flying, and warping through time and space during a jump. Silver at the beginning was shown to be slow at speed (due to a cut speed upgrade), compared to the other Sonic characters, but in the game Sonic Rivals he is shown to be very fast. Silver also uses many of the standard Sonic moves and attacks. These include Homing Attack, Spin Dash, Spin Attack, and super transformation. Silver is also shown to be able to Chaos Control on several accounts to warp through time and space. 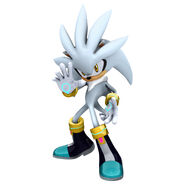 Silver from Sonic the Hedgehog (2006) 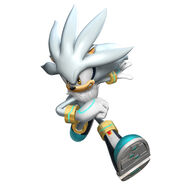 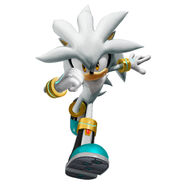 Silver again from Sonic Rivals
Add a photo to this gallery

. during one time in The episode the virus origins Silver sang the song Bats! To help Sonic learn the illness’s origins

. The episode “The Stomach“ has him voring Sonic and trying to vomit him out....this was banned for being too fetishy for children

Retrieved from "https://sega.fandom.com/wiki/Silver_the_Hedgehog?oldid=31238"
Community content is available under CC-BY-SA unless otherwise noted.