Scourge the Hedgehog (also known as Evil Sonic or Anti Sonic) is a 14-year-old hedgehog, and is a villain, and he is found only in the Archie Comics series. As the name suggests, he is an evil double of Sonic the Hedgehog, and thus is an anthropomorphic, humanoid hedgehog. Scourge originally wore a leather jacket, black-rimmed sunglasses, and black leather boots. In order to disguise himself as Sonic, he simply had to remove this clothing and replace it with Sonic's trademark sneakers, though he showed some dislike for the running shoes.

Before draining energy from the Master Emerald, Scourge was an exact duplicate of Sonic, with blue skin and green eyes, but he later transformed so that this color scheme reversed, giving him green skin and blue eyes. Scourge now wears a jacket with flames on the shoulders, black/green shoes and sunglasses with red frames. He also gained two scars (from Locke punching him in anger) across his chest.

Evil Sonic is from Anti-Mobius, a polar opposite of Mobius in an alternate universe, where good is evil and evil is good; he was the supposed leader of a ragtag group of punks called the Anti-Freedom Fighters-a role that was actually filled by his girlfriend: the Anti-Mobius version of Sally Acorn-who overthrew Evil King Max by sending him to the Zone of Silence. Their nemesis is Dr. Julian Kintobor, a kindly country doctor who has developed advanced technology to try and clean up the mess that the Anti-Freedom Fighters cause. Another of their enemies is Anti-Knuckles, a pacifistic counterpart of Knuckles the Echidna who resides in the Sunken Island (an underwater counterpart to Angel Island.

Evil Sonic crossed paths with the "real" Sonic several times, occasionally impersonating him to get Sonic in trouble. This was easy enough to accomplish, because the only physical differences between the two were their choice of attire. With a lack of any menacing opponents in Anti-Mobius, the Anti-Freedom Fighters get easily bored, and eventually take it out on their failure of a leader, ejecting Evil Sonic from the group.

Evil Sonic was recruited by Robo-Robotnik to help him with a scheme, namely to retrieve the pieces of his ultimate creation, the Giant Borg, but, due to the confusion of the various Robotniks, gave the machine to the Sonic Underground Robotnik. For his thanks, the SU Robotnik imprisoned him and prepared him for Roboticization, only to be saved by Sonia and Manic while Sonic, Zonic the Zone cop and the Sonic Underground Sonic defeated Robotnik and obliterated the Giant Borg for good. Unfortunately for Evil Sonic, he was then taken prisoner to the No Zone.

During his time as Zonic's charge, he managed to escape at least twice; the first time he knocked Zonic out and traveled to Mobius Prime, but was taken down on Mobius by Antoine (who thought him to be the real Sonic in disguise as part of a plan to impress Antoine's father); on the second time he made his way back to Anti-Mobius. There he ran into Patch, who wanted a piece of him; Evil Sonic beat him and concocted a plan to punish both versions of Antoine D'Coolette, by switching their places. He later did the same thing with himself and Sonic, taking advantage of Sonic's status to take things easy and make moves on several women in Knothole Village, including Bunnie Rabbot, Amy Rose, and Fiona Fox. Sonic quickly found his way back and fought Evil Sonic in the Chaos Chamber, but the two were once again evenly matched. Knuckles' father Locke intervened, and used a spell to send Evil Sonic away. He then joined forces with Rouge the Bat, the two conspiring to steal the Master Emerald. The weakness of their partnership was made evident when they unexpectedly met up during their only joint attempt to penetrate the Chaos Chamber. Each of them had hoped that the other would distract Locke long enough for them to steal the jewel, and so both ended up being caught by the angry member of the Brotherhood of Guardians.

After draining a small amount of energy from the Master Emerald, Evil Sonic had a reaction which caused his body to change in color. Realizing that he no longer resembled Sonic, Scourge could no longer fool people so easily, thus he no longer bothered trying to, taking his new name to distinguish himself from his counterpart. After demonstrating his new powers against Locke, (stopping short of killing him only when Rouge said she doesn't work with murderers), Scourge used the Master Emerald to enact Chaos Control, taking him and Rouge to Sonic. After a heated battle and being pursued by Shadow the Hedgehog, he and Rouge were teleported to a mysterious location via Warp Ring by the renegade Dark Legion scientist Dr. Finitevus, who convinced the pair to join forces with him, only for Rouge to later abandon Scourge and flee after sabotaging the Doctor's operation.

Scourge reappeared alongside Sleuth Dogg, fighting Sonic until the pair were recalled by Finitevus. Their mission was to recover a Warp Ring stolen by Rouge to make her escape. Hoping to ransom the device from the Freedom Fighters, the pair kidnapped Miles "Tails" Prower and Fiona Fox. Before leaving, Scourge told Fiona, Sonic's then girlfriend, that he had wanted to see her again and how he loved how she played it like she and Sonic were for real. Some time afterwards, he joined the Destructix in attacking a group of Dingoes on Angel Island, convincing Locke that they had reformed. This enabled them to trick Locke into giving them custody of Angel Island and the Master Emerald in particular. With the gem in hand, Scourge and his allies supported Finitevus' master plan: to recreate Enerjak using the Chaos energy inside the Emerald. 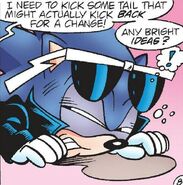 Scourge has he appeared
Add a photo to this gallery
Retrieved from "https://sega.fandom.com/wiki/Scourge_the_Hedgehog?oldid=26387"
Community content is available under CC-BY-SA unless otherwise noted.