The Sega Saturn (セガサターン, Sega Satān?) is a fifth generation video game console, that was originally released on November 22nd, 1994. The console was built using a 32-bit hardware architecture, with the initial intent to excel at rendering two dimensional sprites however this was changed to favor rendering of three-dimensional polygons due to the potential for steep competition from the PlayStation and Nintendo 64.

The system would initially launch on November 22, 1994 in Japan. The US launch of the console was announced live at the first E3 press conference on May 11, 1995, where the console was announced to be available the very same day. The announcement was met with widespread controversy angering many developers in development of Saturn titles and several major retailers some of who would ultimately forgo stocking the console in their stores. 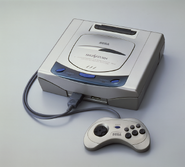 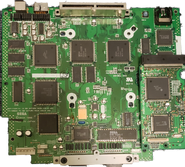 SEGA Saturn Model 1 Original Motherboard A. This contains the earliest American version of the BIOS in ROM. This is the same as the Japanese one, however, the stamped year will say 1994 and the rom will be an earlier revision of the chip displayed in this photo

A riser card needed for the earliest model 1 Saturns. This card has a the video card slot attached, CD access with the Hitachi SH1 CPU fetching data, and an underside connector (not pictured) for mounted on the board

SEGA Saturn Model 1 Original Board Powersupply. Note this one has a proper connector rather than having to slam it on to the board. This means it has to be mounted on the TOP piece of the Saturn. This is the American powersupply by Voltek rated for 125 volts and 21 watts of power. Most other boards were done by Yamaha. The model is VTOPOO1. All American and Japanese boards are rated for 125 volts, however the input from the plugs at the end differ in input voltage by 10 volts. To remove desolder and snap is pins then pull.