Pier Solar and the Great Architects

Pier Solar and the Great Architects is a 16-bit role playing game for the Sega Mega Drive, released in December 2010 by WaterMelon Co. The game optionally utilizes the Sega Mega-CD expansion device to enhance its audio capabilities.

Young and curious, they want to go on a herb-seeking quest to help cure Hoston's father's illness.
Little do they know ... it will be the beginning their lifetime journey where they will learn
the true meaning of friendship and the thrill of adventure.

This journey will demand their courage and wisdom to solve the long lost mystery while
they face the forces of destruction by the evil man who is trying to change the world for his own good.
Trough his escapade, they will be reborn as great heroes to protect the universe from a mistaken purpose. 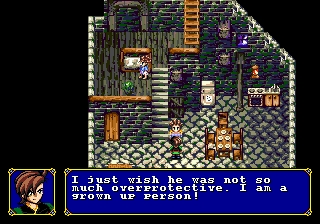 Development of the game began on June 8, 2004 as a small project by the community of the website Eidolon's Inn, a community dedicated to homebrew-development for Sega video game consoles. The project was originally intended to be a simple RPG based on the members of the community, and the target platform was the Sega Mega-CD. At that time the project was simply called Tavern RPG, a reference to the website's message boards being called "The Tavern".

As development progressed the original idea was abandoned in favor of a full-fledged fantasy RPG of greater scale. By 2006 the game engine had become sophisticated enough that the creation of actual content could really begin. While most of the Eidolon's Inn community was no longer directly involved, other people joined the team, leading to a core of eight members with additional help from many more.

Goals for the game became ever more ambitious, with the development being switched from the Mega-CD, for which CD-ROMs would have been inexpensive to produce, to the Sega Mega Drive, a system using more expensive cartridge-based storage media. To allow for the transition without having to reduce the amount of game content, it was decided to use a cartridge with 64 megabits of memory, making it technically the "biggest" game for the system, while finding a way to utilize the superior sound hardware of the Mega-CD at the same time if the device was present. As a result the game became the first Mega Drive game to use both cartridge and CD-ROM at the same time.

The game was announced in a developer's blog with the launch of a website shortly after revealing the game's final title in January 2008. A demo was released later the same year to play on emulators, with pre-orders starting at the same time. A release at Christmas 2008 was announced. The game got considerable media attention for a homebrew title during the following months, with the UK magazine Retro Gamer featuring a two page article in issue 49 and numerous websites reporting on it.  However this release date was not met, the developers citing the departure of a team member who had contributed essential graphics to the game, and his wish not to have his work used in the final version as main reason. The delay was announced on November 14, 2008, but no new release date was given.

Three different versions of the game have been released: Classic, Posterity and Reprint. The Classic and Posterity editions each have three different language packs, while the Reprint features the three most common European languages: English, French and German.

Retrieved from "https://sega.fandom.com/wiki/Pier_Solar?oldid=25834"
Community content is available under CC-BY-SA unless otherwise noted.