The Sega Pico was a blue and yellow handheld with a stylus with a touch screen made by Sega Toys. The system 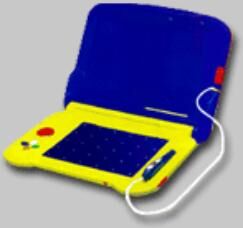 is no longer made however its games are still created. It has many games like Sonic the Hedeghog's Gameworld and Tails and the Music Maker. This system was the only that Nintendo published games and trademarks were put on a Sega related product. 20 Games have been released for this product in the USA. The toy was meant for kids from 2-8 and it's slogan is "the computer that thinks it's a toy." Its successor Advanced Pico Beena was released exclusivity in Japan in 2005.

Retrieved from "https://sega.fandom.com/wiki/Pico?oldid=21230"
Community content is available under CC-BY-SA unless otherwise noted.