Knuckles the Echidna, (born: February 2) is a video game character within the Sonic the Hedgehog fictional universe of video games, television shows and comics. His creator is Takashi Thomas Yuda.

Knuckles is a red, teenage, anthropomorphic echidna, and while Sonic has large, spiky hair locks, Knuckles has some wicked red dreadlocks. He also has a white crescent birthmark on his chest. His first game appearance was in Sonic the Hedgehog 3, released on February 2, 1994 for the Sega Mega Drive/Genesis. He was described as being 15 years old when he made his debut, but since Sonic Adventure, he is now given the age of 16.

Knuckles' name is derived from the four knuckles, two on each hand, which are actually sharp spikes. His task since birth has been to guard the Master Emerald, which is located on Angel Island. According to official Sonic Team polls, Knuckles is the fourth most popular character in the series.

Knuckles lives on Angel Island, which hovers in the sky thanks to the power of the Master Emerald. His duty in life is to guard the Master Emerald, and he is the last surviving member of the Echidna people who once inhabited the island.

In Sonic the Hedgehog 3, Knuckles thought that Sonic and Tails were attempting to steal the Master Emerald, and that the infamous mad scientist Dr. Robotnik (later known as Dr. Eggman) was trying to protect it. However, Robotnik had lied to Knuckles. He was planning to use the Emerald to repair his space station, the Death Egg. In Sonic & Knuckles, in the Hidden Palace Zone, Eggman's betrayal was revealed to Knuckles very bluntly, in the form of an electric shock. Since then, Knuckles has joined Sonic and Tails in their quest to stop the villain.

In Sonic Adventure, the Master Emerald shatters when Eggman frees Chaos and Tikal's spirit from within it, causing Angel Island to fall out of the sky. Knuckles's goal is to reassemble the shards of the Master Emerald. These levels are large, explorable areas in which players must hunt about the various Action Stages for three shards per stage.

In other Sonic titles, he has been seen away from the Master Emerald at times, as in Sonic Heroes, where Knuckles joins forces with Sonic and Tails, becoming the power member of Team Sonic. He serves a similar role in Sonic Riders, which also features a rivalry between him and Storm the Albatross. In Shadow the Hedgehog, he assists Shadow in several Hero missions. In Sonic the Hedgehog, Knuckles appears with Tails as an "amigo" character in Sonic's storyline.

Knuckles is also a playable character in Sonic Rivals. The game starts out with him on a search for the Master Emerald which strangely disappeared. Due to his rivalry with Sonic, once Dr. Eggman reveals he is the cause for the Master Emerald's disappearance, the two begin a friendly competition which expands to include other rivals, namely Shadow the Hedgehog, Silver the Hedgehog and Metal Sonic.

He is a playable character in Multiplayer Mode of Sonic and the Secret Rings alongside Sonic, Tails, Amy, Shadow, Cream, Silver and Blaze. Sinbad the Sailor from the Arabian Nights stories takes the form of Knuckles in the single-player mode.

He has appeared in Sonic Rivals 2 and the Mario and Sonic crossover game, Mario & Sonic at the Olympic Games, along with Sonic and Tails. He also returns in Sonic Riders: Zero Gravity. Knuckles has also been confirmed to appear in Sonic Chronicles: The Dark Brotherhood as a playable character, while not much is known, it is confirmed that he gets kidnapped by a group called the Marauders, who also come into possession of six of the Chaos Emeralds.

Knuckles' personality and character traits vary between various continuities. However, he is consistently used to represent the "tough guy" or "loner," and his abilities remain roughly the same. Knuckles being tricked by Eggman into believing Sonic is the villain has become a recurring theme in the Sonic universe, even to the point of being a running gag. Although he and Sonic fight from time to time, there is an undercurrent of mutual understanding between the two. Ever since the introduction of Shadow the Hedgehog as one of Sonic's darker, more anti-heroic rivals, Knuckles' relationship with Sonic has seen as much more friendly by comparison.

In the games and media, Knuckles is independent, headstrong, devoted to his duty and slightly gullible. He is very serious and usually likes to be by himself, but can be relied upon to help out whenever the world is in danger. Because of his flaws, he and Sonic do not always get along, but are still allies. However, he is also capable of being friendly towards others, although he still retains his aggressive behavior. He even shows some friendly sarcasm occasionally. Various literature from the early games list his favorite food as being fruit, or to be more specific, grapes. He also is described as hating strong sunlight. Likewise, Knuckles also dislikes bright lights (evidenced in Sonic Heroes - Casino Park stage; if no input from the player is received, he sometimes says, "Everything is twinkling and bright...I hate it!". More evidence is when he starts hunting for the Master Emerald in Sonic Adventure, he starts in Station Square and covers his eyes for a moment because of the bright light.). This is not to be confused, however, with hating heat.

Interactions With Other Characters Edit

Sonic the Hedgehog is the main character in which Knuckles finds himself in a tense relationship with. Faced with the solitary task of forever guarding the Master Emerald on Angel Island, Knuckles appears to be jealous of Sonic's independent nature and freedom while Sonic has been known to tease Knuckles from time to time. The two have also had many scuffles specifically when they find each other with opposite interests, mainly due to Eggman's deceitful nature in pitting the two against one another. Despite this, the two are on good terms with a friendly rivalry relationship and can work very well together when it comes to saving the world.

Rouge the Bat was first introduced as a rival for Knuckles, both being expert treasure hunters. Rouge has always been interested in Knuckles's Master Emerald among other jewels and has been known to tease or attempt to steal the massive jewel on a couple of occasions. Knuckles remains highly competitive with Rouge and his emotions around her seem to range from mildly amused to outright flustered by her antics. They are teamed up in Sonic Rivals 2, with Knuckles agreeing to give Rouge the Chaos Emeralds in exchange for help in finding the Master Emerald.

The prospect of a romantic interest between each other has been left on an ambiguous state by Sega, although sometimes spiced up with flirtatious attempts on Rouge's part over Knuckles for a [possible] comic relief spawned from his reaction, nothing has been officially set. Much of the informations spread cross the internet towards their status may have proven themselves more of a theorical opinion rather than a neutral report of facts; while Rouge's page on the american version of Wikipedia states she has a secret crush on him, the japanese version claims it's still uncertain what are her feelings for Knuckles. In his case, neither Wikipedia pages talk about the echidna's relationship with her at all [apart from their rivality].

Tails and Knuckles are allies and appear to be on friendly terms, with Knuckles having acknowledged Tails's intelligence and technical genius on multiple of occasions. They work fairly well together and often team up with Sonic on his adventures.

Knuckles has been friends with the Chaotix ever since they worked together to stop Eggman on Carnival Island in Knuckles Chaotix. In the newer games and the anime series Sonic X Knuckles has limited interaction with the trio as opposed to the Sonic the Hedgehog (comic) where Knuckles is actually the leader of the extended Chaotix team.

Knuckles and Amy work together but don't seem to have much of a relationship apart from this. In Sonic X they sometimes show a brother-sister relationship.

Dr. Eggman was Knuckles' greatest source of irritation. Having been fooled time and time again by Eggman, he has constantly found himself locked in battle with Sonic or others only to realize that he has been deceived.

He was shown to greatly irritate Knuckles the Echidna, the two soon became enemies.

Knuckles is physically one of the strongest characters of the Sonic series. His brute strength is often depicted as equivalent to that of Sonic's speed. His extraordinary physical strength enables him to perform feats such as shattering boulders with his fists. He is also a master of martial arts with a specialty in punching.

Like most characters in the Sonic the Hedgehog series, Knuckles is a very fast runner, though not as fast as Sonic or Shadow. He also uses Spindash which are variations on the tendency for echidnas to roll into tight spiny balls for protection. However, Knuckles is one of the few characters that is able to swim and float along the surface of a body of water. Although his jump height is relatively low, he can glide by, according to the Sonic Heroes manual, trapping air under his dreadlocks. Knuckles is also a proficient burrower, able to dig into nearly any wall or floor, and can use the spikes on his eponymous knuckles to grip and climb walls. As the Guardian of the Master Emerald, he is able to access and utilize its powers, allowing him to use some Chaos powers in an incredible manner, and can sense it from a distance, even in pieces. This comes into play as Knuckles's role in the games sometimes involves tracking down the Master Emerald. Additionally, he seems to be able to sense other energies such as those used in Chaos Control.

Like several other characters in the Sonic games, Knuckles can make use of the Chaos Emeralds to transform into a Super Form, named "Super Knuckles." In Sonic 3 & Knuckles, he could also use the Super Emeralds to transform into "Hyper Knuckles." The exact powers granted by these transformations vary from game to game, but generally he has the ability of flight and near invulnerability and his normal abilities of speed and power are greatly enhanced. 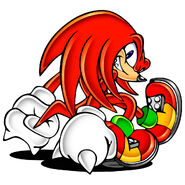 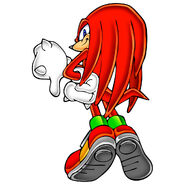 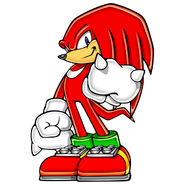 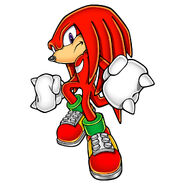 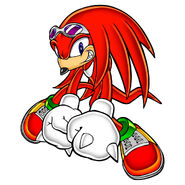 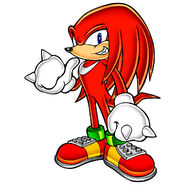 Knuckles once again from Sonic Adventure 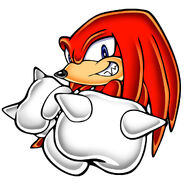 A portrait of Knuckles

Knuckles from Shadow the Hedgehog 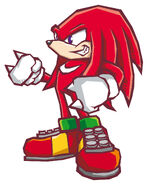 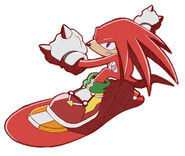 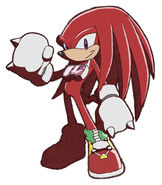 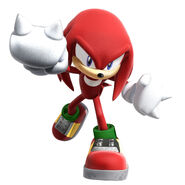 Knuckles from Sonic the Hedgehog (2006).

Knuckles From Sonic 3 (& Knuckles)
Add a photo to this gallery

Retrieved from "https://sega.fandom.com/wiki/Knuckles_the_Echidna?oldid=23476"
Community content is available under CC-BY-SA unless otherwise noted.