Eternal Champions: Challenge from the Dark Side

Eternal Champions is an 1993 arcade style fighting game published and developed by Sega Enterprises. Released shortly after Burning Rival, Dark Edge, and Holosseum, and both during a wave of success of the fighting games bolstered by Street Fighter II (1991) and Mortal Kombat (1992) Sega developed this game for their Sega Genesis/Mega Drive exclusively.

Eternal Champions was added as a downloadable virtual console game to the Nintendo Wii on 12/3/07. There were also two spin off games, Larcen Tyler's Chicago Syndicate, and Shadow Yamoto's X-Perts.

An omniscient being known as the Eternal Champion predicts that mankind will soon fade to existence due to the untimely and unjust deaths of key individuals throughout history who were destined for greatness. Seeking to restore balance to the world, the Eternal Champion gathers these souls from time moments before their deaths to participate in a fighting tournament. The victor will be able to change their fate and bring balance to the universe, whilst the losers will be forced to live out their deaths just as history intended.

Unlike most fighting games, or video games in general, there are no characters in this game that are "bad" or "evil". Each character has been chosen because they are either inherently good, or they have the potential to do great good and change the course of history for the better. Despite the ability to kill opponents in this game, this is not relevant to the story. Much like games such as Mortal Kombat (which pioneered finishing moves in fighting games), the game's "Overkills" are not canon and simply a gameplay element for the enjoyment of the player. It is actually revealed in a few character endings that some of the fighters had become allies or friends during the course of the tournament.

Promotion and other media

A Slurpee flavor entitled "Sega Eternal Champions Cherry" was once available in 7-Eleven stores throughout the United States. It came in cups with pictures of the characters on them, and the bottom of the cup contained a temporary tattoo. There was also a special cash & rebate promotion in July 1993 that was featured on MTV. Electronic Gaming Monthly sponsored Eternal Champions tournaments in the United States as part of a roaming video game show. The game, however, was not yet completed so the participants were only given the choice of four characters to play as: Shadow, R.A.X, Larcen and Slash.

Two gamebooks, titled Eternal Champions Adventure Gamebook: The Cyber Warriors and Eternal Champions Adventure Gamebook 2: Citadel of Chaos, were released by Puffin Books. In the books, the reader controls the newest Champion and travels through time helping the game characters battle a megalomaniacal artificial intelligence called the Overlord, who is bent on replacing them with duplicates so that they cannot change the course of history for the better. Both books were released as sticker albums by Panini in 1993. 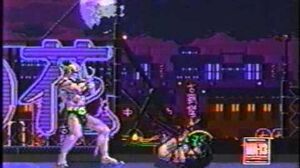 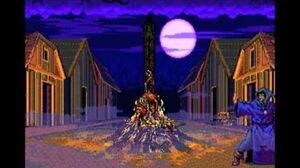 Eternal Champions Taunts and Finishes
Add a photo to this gallery
Retrieved from "https://sega.fandom.com/wiki/Eternal_Champions?oldid=32712"
Community content is available under CC-BY-SA unless otherwise noted.