Honey/Candy is a fictional character from the video game series Fighting Vipers. She was renamed as "Candy" in the North American and PAL localization of "Fighting Vipers". She also reappears as a playable character in Fighting Vipers 2, her name was changed back to Honey in the PAL release.

Candy is a girl who dreams of becoming an apparel designer. Learning of the Viper Tournaments, she dons her own self made rubber armor, and enters, heartily feeling it would be a great idea to use the tournament to show off her latest works and styles.

In the International Release of Fighting Vipers some graffiti on a wall states "In Memory of Honey you will always be remembered by your family and friends R.I.P", which would indicate that Honey is dead, but in fact the US release changed her name from Honey to Candy, and references that her name is no longer Honey in the international releases, where as in Japan she is still known as Honey.

Even if B.M. would order a crackdown on Vipers, that would not stop her dreams either! Candy feels that even the Viper Hunts would be as great as an opportunity as the last tournament held two years ago to show her styles.

The character Honey the Cat was a character originally intended to be in the game but was scrapped due to a lot of glitches in her coding and character model. She is now back into the game as part of its HD release, with all the glitches fixed.

Honey is a humanoid cat about a meter tall. She has close-lying orange-yellow fur, a peach muzzle, and long black hair on top of her head that she keeps in two voluminous ponytails on the upper back of her head. She also possesses triangular and perked ears with peach inner ears, a small black nose, large sharp eyes with big and completely black pupils, thin arms and legs, and a slim, simple tail. Honey possesses a very elaborate attire—her red rubber dress.

In her hair, she wears a red hairband in front of her ears, and securing each of her ponytails are elaborate white laced cloth-like hair barrettes. She wears a red dress with poofy shoulders, black straps at the end of her sleeves, black collar, a pair of white wings on the back, and white laces. Her dress also has black outlines around the waist and shoulders, and a black area on her front skirt with white string fasteners. For her hands, she wears white gloves with red backs and laced cuffs, and black arm wrappers around her wrists. Finally, she wears black shocking and red knee-high high-heeled boots with pointed toes. 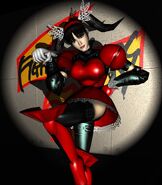 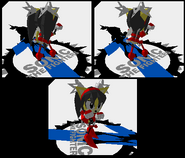 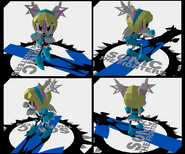 Candy without armor - back

Candy without armor or skirt

Candy without armor or skirt 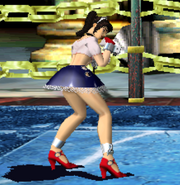 Honey without Armor (Back) 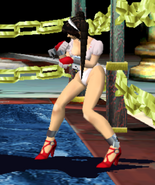 Honey without Armor and Skirt

Honey without Armor and Skirt (Back) 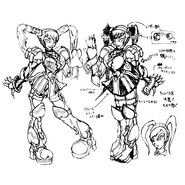 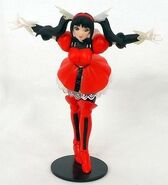 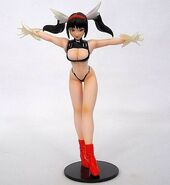 Figurine (No Skirt)
Community content is available under CC-BY-SA unless otherwise noted.
Advertisement